August 12th, 2013 | Posted by Ibrar in Being Prepared
Fact Checked

Convulsions in children can be terrifying for parents, especially if there is no history of convulsion. A convulsion is also called a seizure or “fit.” A convulsion is a period of involuntary muscular contraction.Frightening as it may seem, it does not usually cause life-threatening situations or long-term consequences. They are not generally fatal. Febrile convulsions occur in an estimated 4% of all children between six months and five years of age, generally at ages younger than three. More than half of these children will only experience one convulsion in their lifetime. It is more common in young boys than girls and can run in families,

The contents of this article should not be used as substitute for medical advice. Enrol in first aid training and CPR courses to learn more about convulsions in children and other emergencies that children may have.

Causes of Convulsions in Children

It may be difficult to diagnose the exact cause of the seizure as it generally lasts from 30 seconds to a few minutes. However, some of the common causes are the following:

Symptoms of Convulsions in Children

Although it may be quiet obvious when a child is having a convulsion, some of the characteristics of seizures include:

When a child starts convulsing, the main goal of first aid is to protect the child from any injury. 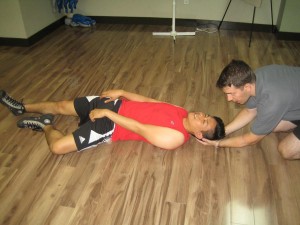 Keep your hands behind the head when a child is having convulsions to prevent head injury.

Do not attempt to restrict movement as it may just lead to more harm to a convulsing child.

Let us know if you liked the post. That’s the only way we can improve.
Powered by Helpful

You can follow any responses to this entry through the RSS 2.0 Responses are currently closed, but you can trackback.

At St Mark James Training we work hard to ensure accurate and useful information on our blog website. However, the information that we post on our website is purely for educational purposes and should not be used as diagnosis or treatment. If you need medical advise please contact a medical professional