January 14th, 2016 | Posted by A. Jones in Skeletal Injuries - (Comments Off on Bone bruise caused by running)

Bone bruise is also known as bone contusions or sometimes bone swelling. The injury is similar to tissue bruises and fractures. The bruises can be due to injury or blunt trauma caused by forceful impact when playing sports and accidents. It can cause severe pain that can last for weeks or even months.

Sports bruises happen when the body comes in direct contact with hard surfaces, such as falling, bumping into the equipment of another player.

Seek medical help immediately if swelling and pain cannot be minimized within a week.

Avoid running on hard surfaces in order to help prevent injuries on the knees for developing.

How to treat bone bruise in the ankle

December 26th, 2014 | Posted by A. Jones in Being Prepared - (Comments Off on How to treat bone bruise in the ankle)

A bruise is an injury to the tissue found below the skin. The injury to the affected area causes blood vessels to break and bleed into the layers of tissues found under the skin. A bruise causes discoloration of the skin such as the purplish-red color that changes to blue and turn yellowish-green before healing. Symptoms of a bruise include tenderness, swelling and pain.

There are three types of bruises – subcutaneous bruises that just happen beneath the skin, intramuscular bruises which involves the layers of the muscles and bone bruise which causes injury to the bone. A bone bruise takes longer time to heal and it is more painful than the other bruises.

What is a bone bruise? 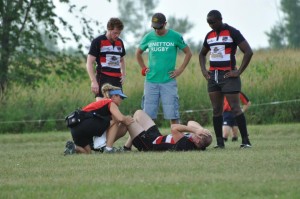 Apply ice massage to the affected area at least 5 minutes several times a day in order to minimize the swelling and pain and the start the healing process.

A bone bruise is also known as hematoma or contusion which is a common sports injury. Bruises happen in sports when the body makes contact with a hard surface like falling in the ground, some sports equipment or a bump by another person. The ribs are most susceptible to this injury caused by chest impact in playing contact sports. In order to prevent these kinds of injuries the players wear a protective gear such as shin guards and helmets that is suited for a particular sport.

Vehicular accidents can also cause high velocity impact to the body and the bones, and it is so strong that can cause a bone bruise. Bone bruise can also happen after falling into a hard surface such as slipping on ice and falling from a higher height will increase the risk of having this injury. Direct trauma to the body caused by other people or objects can also cause a bruise.

Some injuries to the body can be caused by traumatic twisting like joint sprains. The bruising will happen when the twisting joints will cause the affected bone found in the joints to bump with each other. The knees and ankles are the most susceptible to these forms of injuries.

Treatment of bone bruises in the ankle