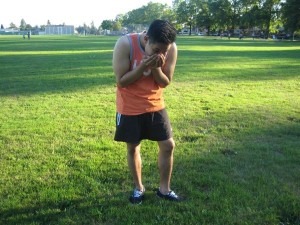 lungs or the throat. Blood present in cough may range from frothy to pink or bright red or mixed with sputum. Coughing up blood is not always caused by a serious underlying disease. It is fairly common to produce a sputum tinged with little blood from time to time and does not usually connote call for alarm. Emergency medical services should be called if coughing up blood occurs frequently or blood appears in large quantities.

The common types of hemoptysis are mentioned below.

Many potential diseases can lead to hemoptysis as seen above. Some of the other causes of hemoptysis not mentioned above include:

Many tests can be performed to determine the bleeding rate and if there poses danger to breathing. These tests will determine the cause for hemoptysis:

Treatment will always vary depending on the underlying cause of hemoptysis. Some of the most common treatment includes:

No direct remedy can be given to treat hemoptysis. Although understanding hemoptysis can aid when taking first aid training, as knowledge on these matters can help recognize symptoms, especially when discussing airway obstruction.